The award-winning research she is undertaking on nanodiagnostics, regenerative medicine and personalised therapy in the field of nanomedicine is excellent. 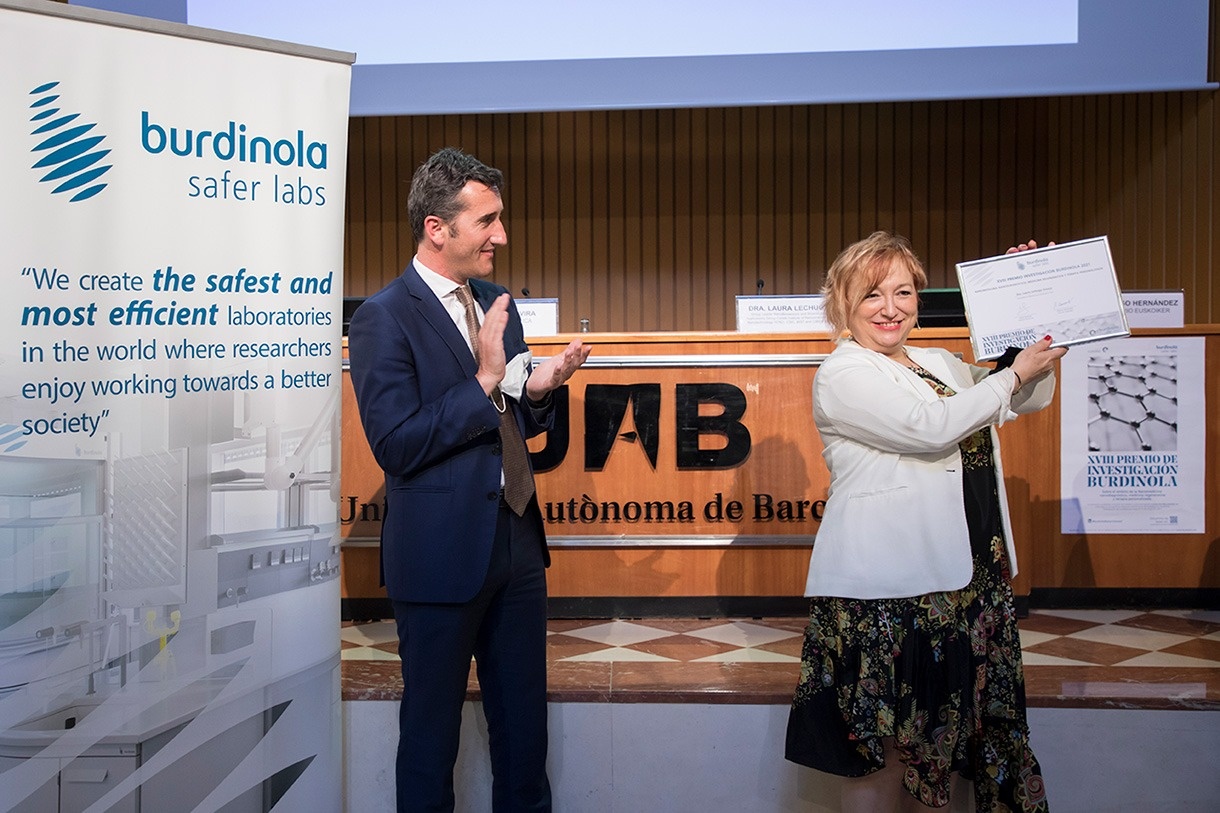 Professor Laura Lechuga did her PhD in Chemistry at the Complutense University of Madrid (Spain) in 1992. She is Senior Lecturer at the Spanish National Research Council (CSIC) and Head of the Nanobiosensors and Bioanalytical Applications Group at the Catalan Institute of Nanoscience and Nanotechnology (ICN2) in Barcelona (Spain) and at the Centre for Biomedical Research Network (CIBER-BBN). She was an adjunct professor at the Arctic University of Norway (2012-2016) and distinguished visiting professor at the University of Campinas (Brazil) (2013-2017).

Dr. Laura Lechuga was named the winner of the 18th Burdinola Research Award by the jury, which this year chose to recognise the most outstanding work in the field of nanomedicine: nanodiagnosis, regenerative medicine and personalised therapy. At the meeting of the jury, special mention was made of her leadership and pioneering attitude, knowledge transfer and international outreach.

Dr. Lechuga's laboratory was created in 1998, a pioneer in the field of nanodiagnostics, and is today a world leader in the field of nanobiosensor devices based on photonic principles. Dr. Lechuga stands out for combining both basic science and developing technologically sophisticated devices using her own ideas and designs, which have been implemented in pioneering technologies worldwide with a remarkable interdisciplinary approach involving physics, microtechnologies, photonics, biology and medicine, and demonstrating their direct applicability to diagnosing diseases (mainly cancer and infectious diseases).

Dr. Lechuga leads the “Nanobiosensors and Bioanalytical Applications” research group at ICN2, which is focused on nanomedicine and has more than 20 members. She is also a Research Professor at the CSIC and is linked to the Carlos III Institute of Health's CIBER-BBN (biomaterials, bioengineering and nanomedicine). Her area of research focuses on nanomedicine, nanodiagnostics and the technological development of nanobiosensors and their integration into portable point-of-care (POC) platforms, as well as their application in decentralised clinical diagnostics.

Her most important scientific contributions in the field of nanodiagnostics are centred around developing highly sensitive nanophotonic and nanoplasmonic biosensors that can be miniaturised, developed using her own ideas and technology, and around the technological transfer of her results. Her work on photonic biosensor devices such as the Mach-Zehnder and bimodal waveguide interferometers, the magnetoplasmonic biosensor and the waveguide microlever biosensor has been pioneering worldwide. Her extensive experience in sensor surface biofunctionalisation and the application of devices has made it possible to use them to assess real problems such as the quick and accurate early diagnosis of diseases directly from human samples, including cancer and infectious diseases. One of the main achievements of her work has been the development of functional lab-on-a-chip platforms, integrating biosensors, microfluidics, electronics, hardware and software into a single platform, in a device that can be used outside the laboratory environment (point-of-care device).

Her high international impact is reflected in her impressive CV, where she has published more than 270 research papers (h index=51 and more than 9900 citations, Google Scholar) and has given more than 365 invited lectures worldwide, including at the most prestigious conferences in her field. One of the main highlights of her scientific career has been her translational approach, with important and successful work in technology transfer, including managing 8 patent families and setting up two spin-off companies: SENSIA, SL (2004) and BIOD, SL (2010), transferring several patents and collaborating with many major Spanish companies, which began very early with a successful collaboration with Tabacalera, S.A. during her doctoral thesis (1990).

Over the years, another of the hallmarks of the award has been the high level of scientific and business expertise of the members of the jury.

Seven experts evaluated the different nominations for this eighteenth edition and chose the winner on merit from among them. The jury was chaired by Dr. Joseba Pineda, dean of the Faculty of Medicine and Nursing at the UPV/EHU, with Dr. Alfonso Hernández, Director of the Euskoiker University-Business Foundation, acting as secretary. There were also five prestigious members of the committee: Dr. Maria Ángeles Muñoz, Dr. Maria José Alonso, Dr. Arkaitz Carracedo, Dr. Josep Samitier and Mr. Mikel Martínez, General Manager of Burdinola, the latter with the right to speak but not vote.

In its decision, the jury also wished to highlight the high standard of the candidates nominated for this eighteenth edition of the Burdinola Research Award.

An activity in direct contact with research teams and a special awareness of the social environment led Burdinola to come up with the idea of creating an award that would contribute to recognising, valuing and stimulating the scientific community. This idea materialised in 1994 with the launch of the first Burdinola Research Award. Since then, the list of award winners has continued to grow with some of the biggest names in Spanish science.